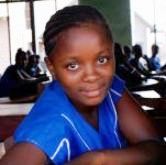 “I Washed Plates to Raise Money to Join and Started With My Friend’s Phone, Now I make an Average of N81,000 Monthly” – Chioma Obi, SS2 Student, Owerri

I am the first Child and my parents are very poor. I first stumbled across moneymaker.ng website when I was browsing with my friend’s phone and I was very interested but I did not have the money to join so during our long holiday, I went to restaurants and hotels washing plates, fetching water and pounding yam and fufu to raise the money.

In my first term in SS2 I was able to register as an agent and started with my friend’s android phone because I did not have a phone. Despite the fact that I promoted to many people, only one person registered in the first three months because many people felt that it was not real. Even the person that registered was not serious and I too nearly got discouraged but I believed that I will succeed so I kept on telling people and promoting my links on whatsapp, facebook groups, blogs and social media.

The fourth month, I managed to register two very serious people – a man and his wife – and I taught them how to register other people. Soon they started bringing in people and those people were also bringing others and before I knew what was happening people just kept joining. They even started organising talks and seminars as a team. After 8 months as an agent, the average I now get in a month is N81,000 mostly from their work and still increasing. My life has been transformed forever and I can now help my parents and younger ones thanks to being an Agent of MoneyMaker.ng.

Ad:
Thanks for subscribing! Please check your email inbox or spam or promotions tab for a confirmation link.

Thanks for subscribing! Please check your email for a confirmation link.