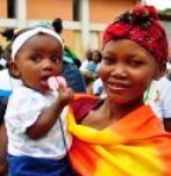 “My Commisions Paid for My Medical Bills When I Put to Bed and Also Saved Us from Starvation” – Mrs Aishatu Sule Bappah, Housewife, Nasarawa

Four months before I gave birth, my husband who was the sole provider of our family of five came down with an ailment that made him unable to work. Even the small money we had managed to save was all spent on his treatment. With my husband down with sickness, I suddenly became the bread winner saddled with the responsibility of providing money for the family upkeep and for my upcoming maternity bills. I desperately started looking for any means to make money.

That was when my brother’s colleague told me about MoneyMaker. At first I was worried that I would not be able to cope because I was far gone in my pregnancy but after much persuasion, I reluctantly joined as an Agent. As I started doing it, I realised that even with my pregnancy, I was still able cope and soon started earning commissions which I saved towards my upcoming bills and my family’s upkeep.

During the delivery of my baby, I had some complications and the only way out was to have an expensive operation. The money needed was far more than what we had anticipated but the luck we had was that the money that I had been saving from my MoneyMaker agent commissions was just enough to offset the bills. After my delivery we didn’t have any money left to feed ourselves and our new baby and I was very weak.

We were almost at the point of starvation but the nearly continuous flow of commissions from my downlines sustained my family during this difficult period. Today my husband is now strong and well and he has left his former job to join me as an agent in this wonderful new business. Our baby is also hale and hearty. The next target we are working on now is to save and buy a plot of land with our commissions and start building our own house all thanks to MoneyMaker.ng.

0.0
00
Thanks for subscribing! Please check your email inbox or spam or promotions tab for a confirmation link.
Ad:

Thanks for subscribing! Please check your email for a confirmation link.